Company: GOQii Technologies - Provides a fitness band and a mobile app for users to get healthy and meet their fitness goals.

Project: To design GOQii Play - A live video health class with coaches and experts on the GOQii mobile app. We wanted to do a live platform to make it feel more personal than watching a YouTube video.

The Goal: To help users with exercises and get industry experts to answer their health-related questions in a live online forum.

We would look at the following metrics to measure the impact of this feature,

Team: The team comprised of a Market Researcher, a Graphic Designer, an android developer, one backend engineer, and me as a Product Manager / UX Designer.

I designed a quick MVP and then iteratively added more features and improved the designs over time.

My Design Process on GOQii Play

We conducted 10 user interviews to understand user behaviour and current trends. We asked the following questions,

This qualitative study helped us craft a more objective survey that we sent to 500 GOQii users as well as 1000 non-GOQii users.

Insight #2: Users do not currently attend any Live exercise classes online because they are not aware of them.

Insight #3: Users are keen to get health content in their regional language.

To test the concept further, we started to conduct Live Classes on Facebook Live and YouTube Live. We marketed it in the GOQii app and monitored click rates. We tested with multiple banners and messages. We saw promising results. This helped us build more faith in our direction, and understood the type of content that worked well before investing in getting more coaches on board.

Based on our research we created a sample persona to help us build a uniform image of the user across teams. 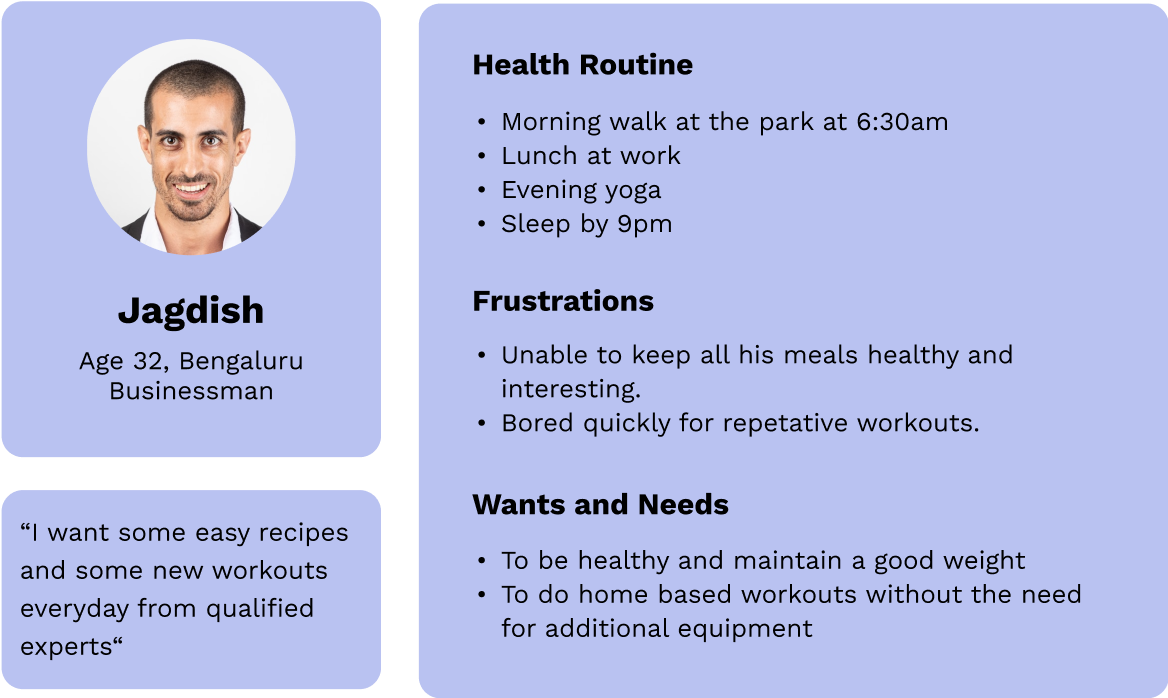 I studied the current live streaming platforms in the market. These had a lot to offer in terms of what designs users were already familiar with. I looked at YouTube Live, Facebook Live, and Instagram Live. 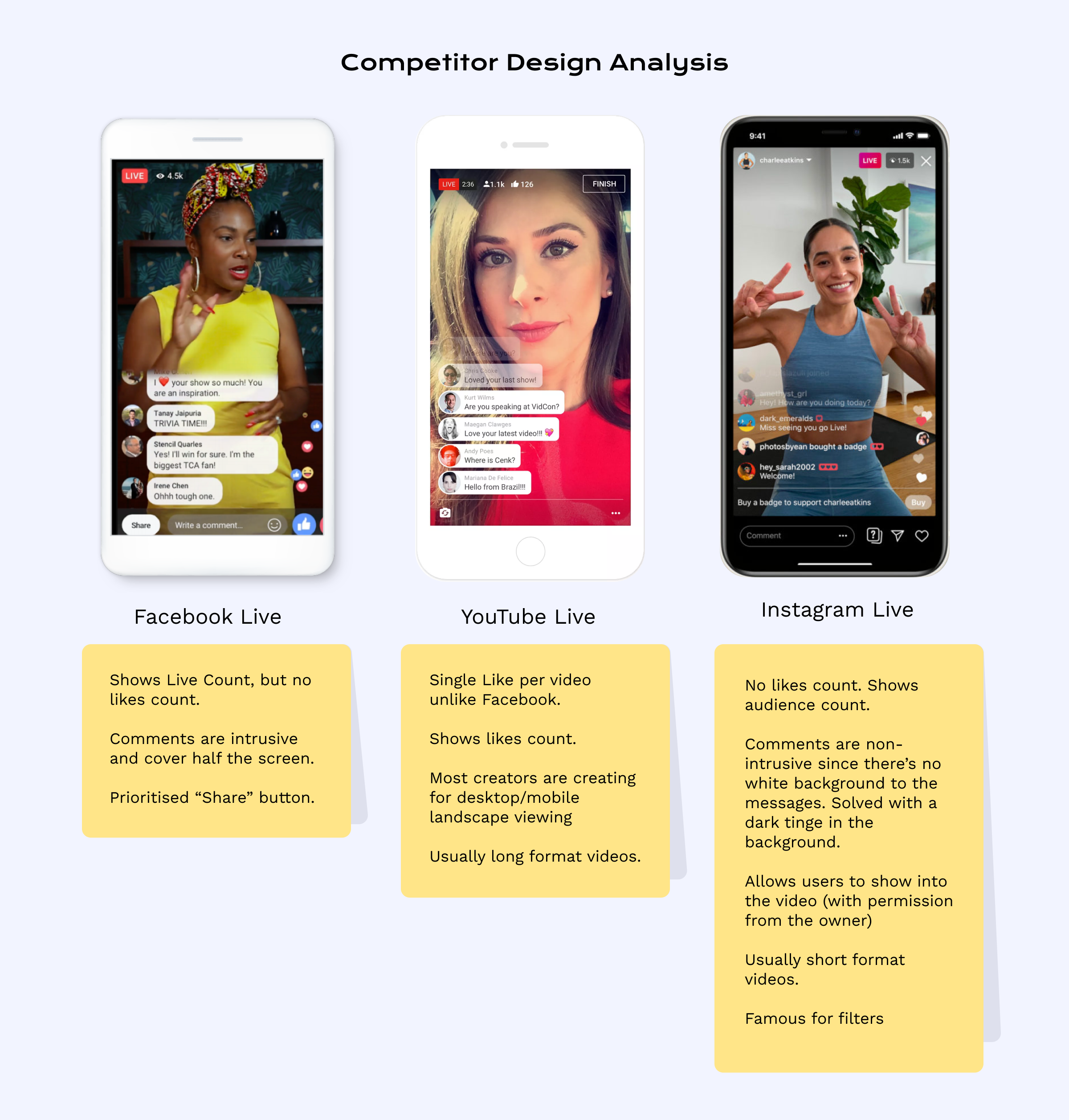 All platforms had relatively simple UIs with chat, share, and likes as the call-to-actions for the users.

We stuck to a layout closer to Facebook live since that was the most familiar for users in the India at the time.

We decided to have the following features in the first launch of the product,

We kept it basic. Enough to test our concept and get some additional engagement on the platform.

We trained some of the in-house coaches to take video classes. We had them stream from a third party RTMP supporting app, and read user comments on a temporary web page we had created for each class.

We ran simulations with a test audience before releasing on the app. 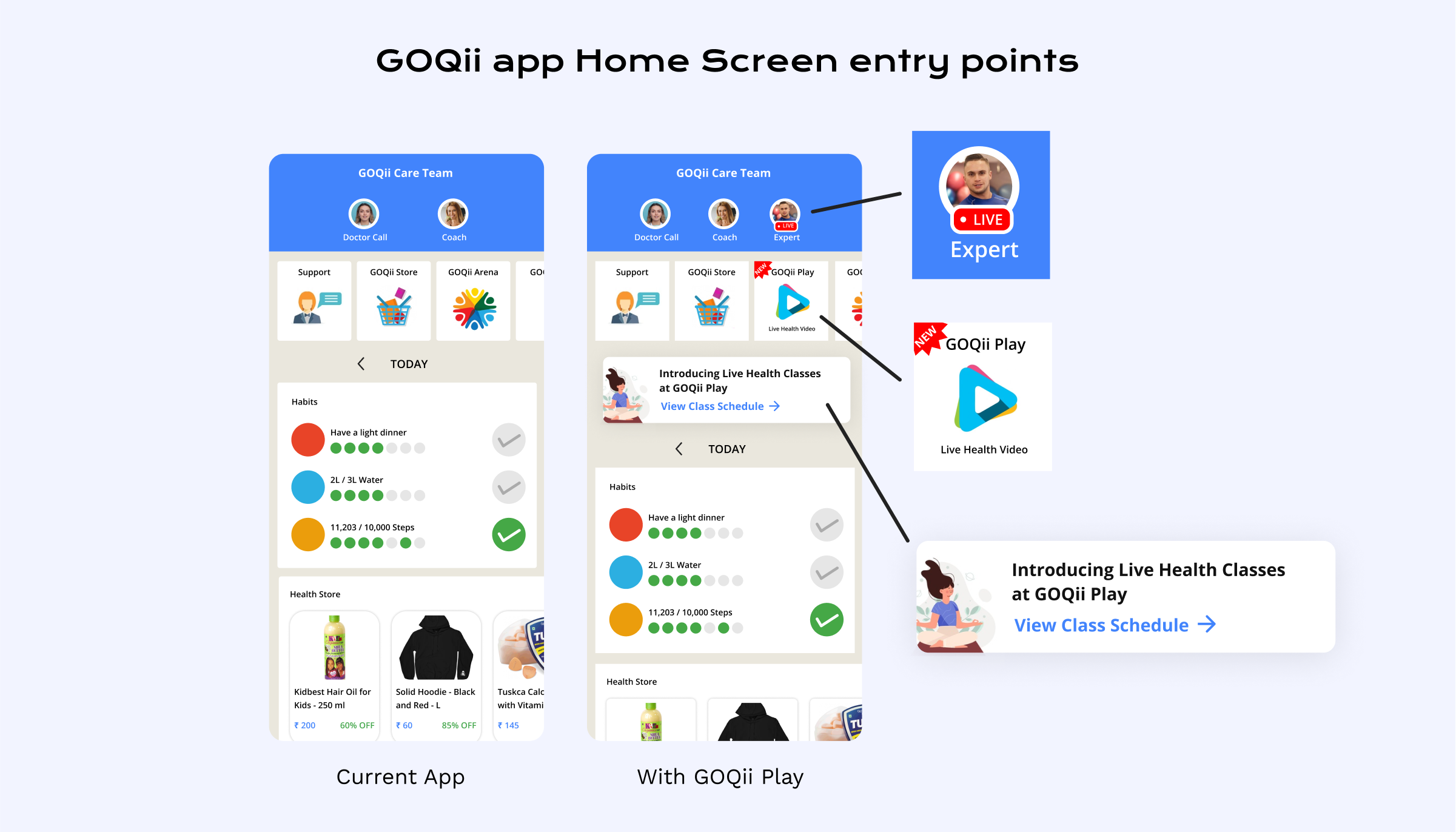 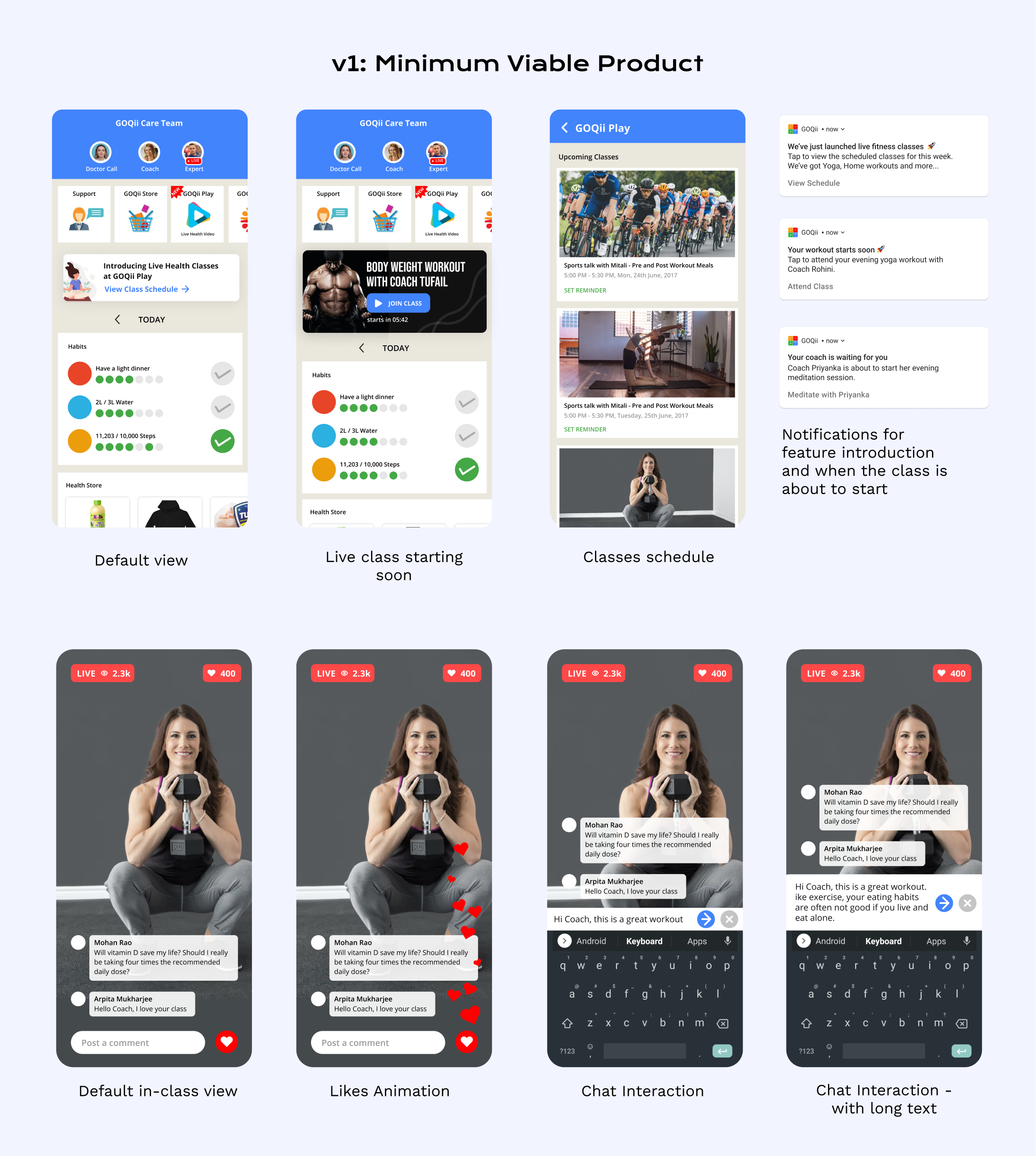 One week after launch we had,

We also noticed a problem that 19% users were dropping off even before the video had loaded for them.

We called 10 of these users to get feedback. Following were the results,

v2: Building for the future

After bug fixing and some minor releases it was time to build version 2 of the product. We narrowed down the scope to the following items,

We passed on the collected ratings to the coaches, and helped them improve class completion rates from 5% to 12% in 2 months.

We saw a steady increase in the GOQii Play DAU, improvement in the adoption rate (with the help of notifications, emailers, and YouTube promotions, and we started tracking our retention rate on the feature.

The focus of version 3 was to help users the classes they need. We finalised on the below feature set for the next release, 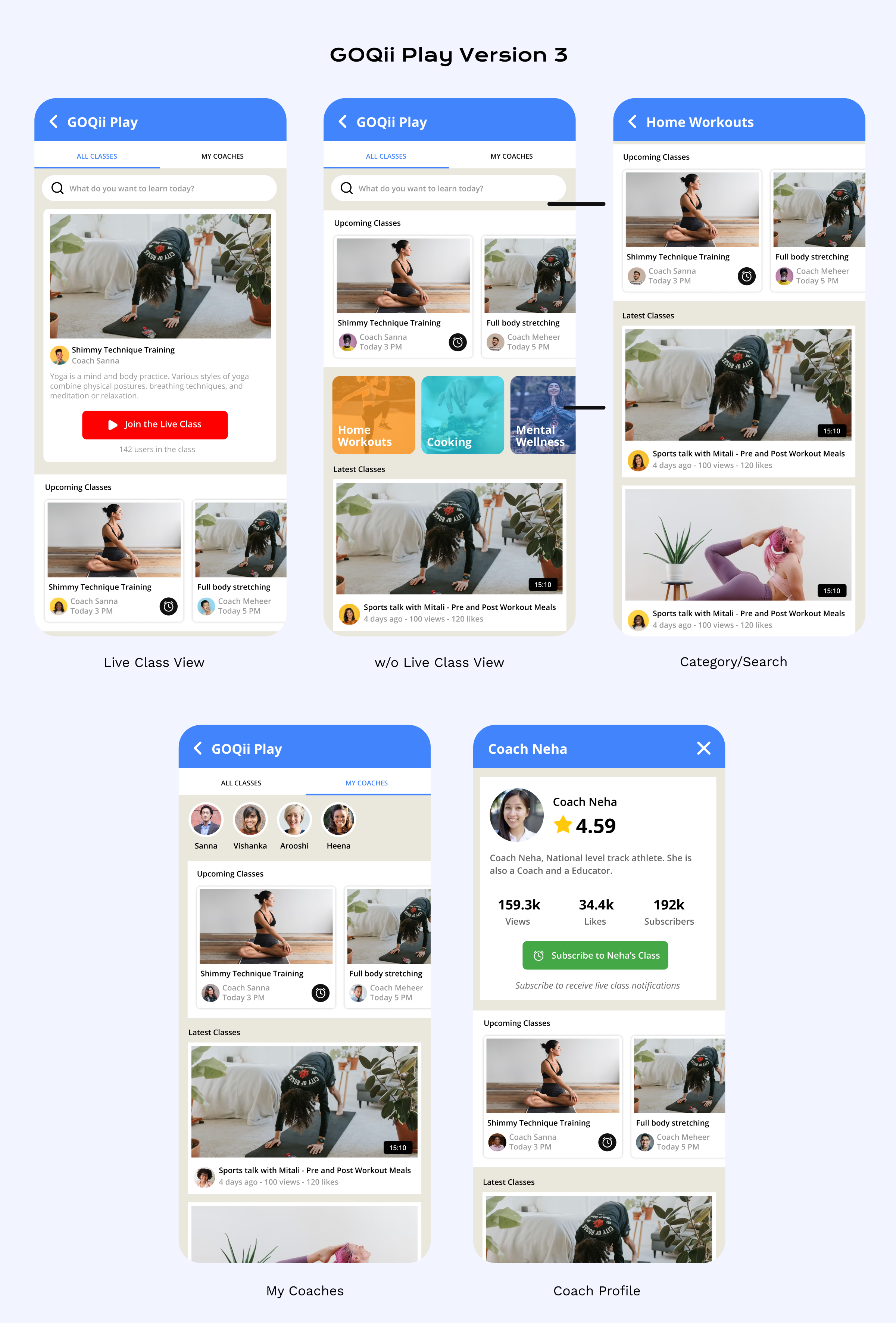 After the launch of version 3 we saw major uptick in,

I set up a coach-wise metrics board for the entire team including the operations team. This helped team give prompt feedback to coaches and understand which coaches were over performing and under performing.

Comments: This is a good indicator of the personal touch the coach is able to provide. We had coaches that engaged more with their audience and got a high comment count. We encoraged all our coaches to do the same.

Views: This is a good indicator on whether the content/thumbnail was good enough. Clickthrough tell us whether the user was interested in the video to begin with.

Rating: Rating is the most important indicator for user feedback. This guides us on coach performance.

Average Minutes per View: This tell us if the video was sticky enough for the users, are did users end up leaving too quickly.

All these parameters helped us curate better content over time.

The feature had lead to increased time spent on the platform. Users that watched videos on average made more purchases on the platform and showed better renewal rates.

6 months after launching GOQii play, it was now time to monetise the feature.

We used the in-app currency called “GOQii Cash” to allow users to purchase “Priority Questions”. These questions would be highlighted to the coach (this ensured that the question would get answered.

We also launched a new subscription plan and made commenting a paid feature in the app. 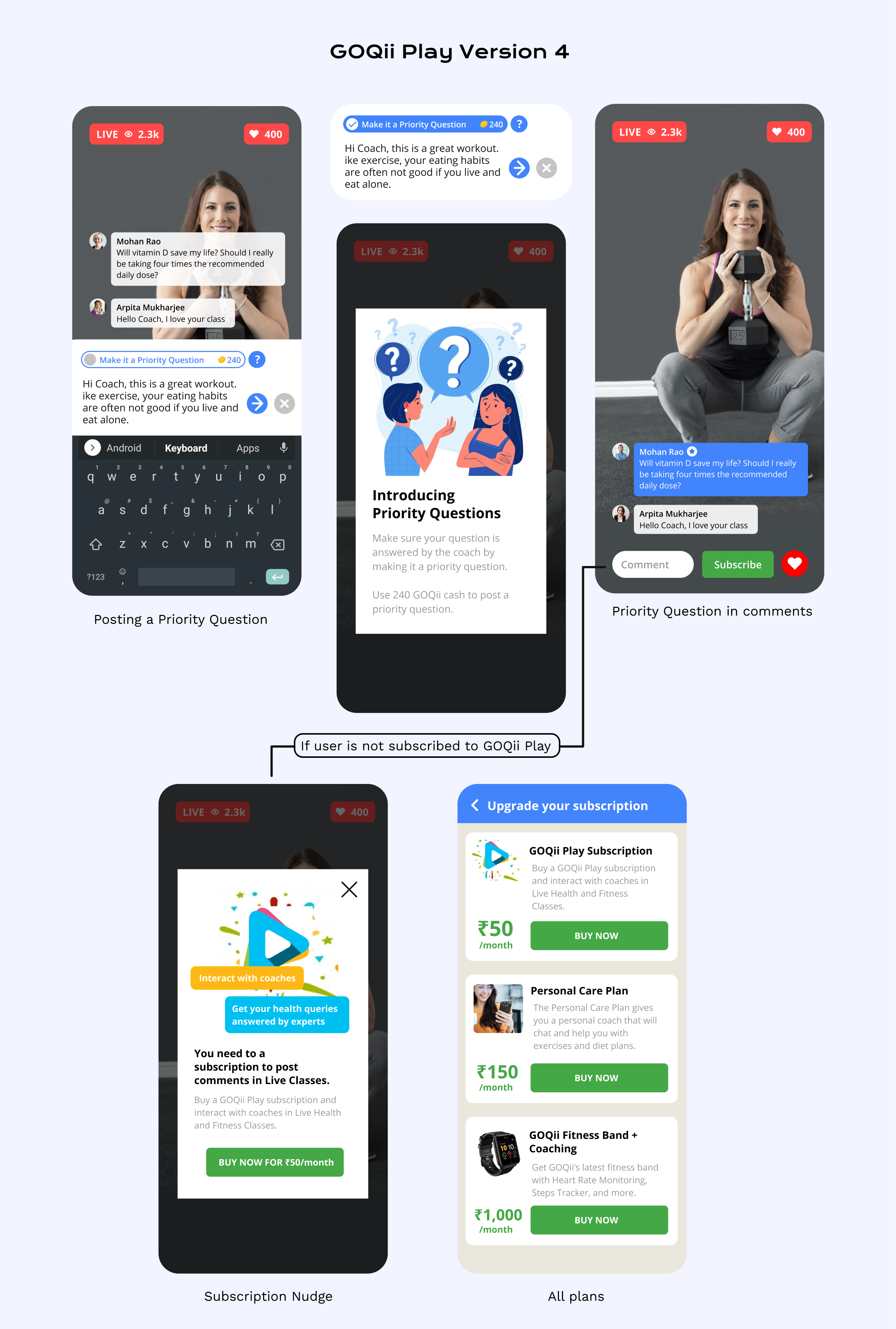 Once the core functionality of the product was completed, we invited celebrities to conduct shows on the platform to improve adoption and help acquire new users. 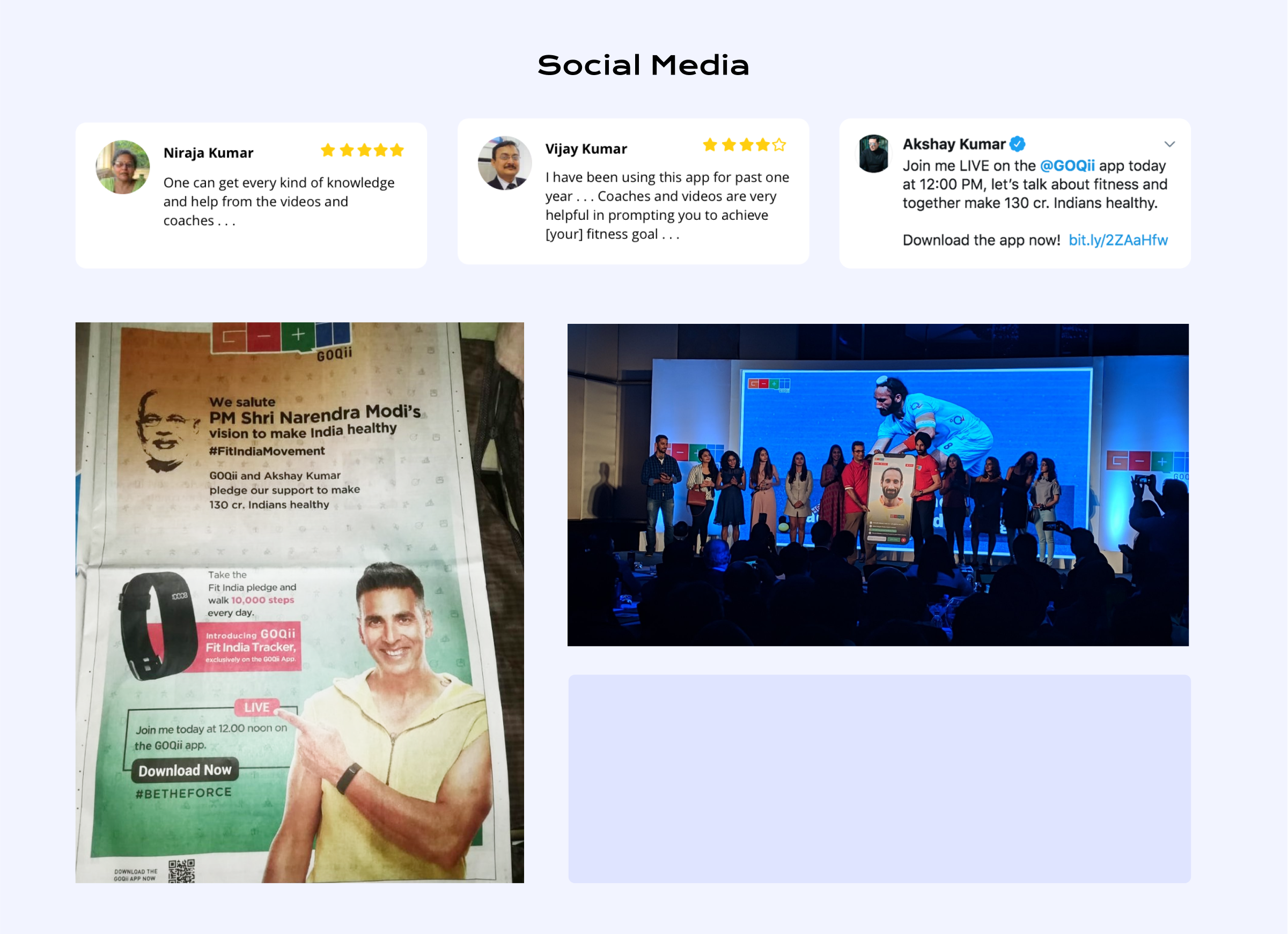 Personalisation of content: We need to reach the right people with the right classes. We have content for all age groups and a lot of health issues. We need to make sure that the videos that the user is recommended are relevent to their needs.

Live Quizzes: With the growing popularity of live quizzing platforms like HQ Trivia, we see an opportunity to create something similar in our product. Health quizzes hosted by the coaches will be entertaining as well as educational for the user.

Tutorials/Series: Coaches will be able to create series like "Coach to 5K", or "30 day weight loss problem".

Heart Rate integration: Add Heart rate on the screen while the user attends a class.